AfterEllen.com: I loved the script, I thought it was really sharp and honest and real I was touched at a very personal level because it deals with diversification and I’ve always been the token Latina and now I’m like the token lesbian on crews. Do you have any stand out moments where maybe you felt like something connected with you at a personal level?

Nisha Ganatra: Yeah, I would say the whole movie is very personal I try not to make movies that aren’t, so, yeah I couldn’t name one moment. The whole story is very much my experience and Mindy’s experience is sort of fictionalized and brought to a more comedic place, you know? It was a very personal movie, so I think all of the themes and the whole story comes from a place of personal experience.

“We are two Indian American women working in comedy, and there aren’t that many of us in the industry, so we are very aware of each other. I think we found a nice balance where she felt like she could trust me with her words and I felt like I was given what you want as a director – the freedom to express your vision.”

AE: What was it like working with Mindy, when you’re in a situation where working with an actress who is also the writer, were there any moments when you butted heads sometimes writers can be very sensitive about their scripts, what was the dynamic like between both of you and establishing trust?

NG: We are two Indian American women working in comedy, and there aren’t that many of us in the industry, so we are very aware of each other. I think we found a nice balance where she felt like she could trust me with her words and I felt like I was given what you want as a director – the freedom to express your vision. So no, we didn’t butt heads. I think in all we were very collaborative and very respectful of each other.

AE: Watching the film there were a few moments where I was sort of shocked, like whoa they said that, but it’s just, that’s real life, that’s how people talk. The script just sounded very honest, did you ever have any doubts of oh maybe this line might be too much or were you set out on making the film you wanted to make and that’s just the way the conversation needed to be?

NG: Mmm. I guess I really didn’t realize it until I started hearing people saying it later that some of the things we were saying were shocking or kind of bold, because I spend a lot of time with comedians and comedians are the people that are sort of the truth sayers of our society. They are brave and they aren’t afraid to say the things other people are too afraid to say. If you look at our culture right now, Seth Myers, Samantha Bee, Steven Colbert – they are all speaking on Trump and what’s happening in a way that most people aren’t, so I think I kind of always expect comedians and comedy to be bold and politically risky. Otherwise, it’s not really doing its job as comedy.

“Comedians are the people that are sort of the truth sayers of our society. They are brave and they aren’t afraid to say the things other people are too afraid to say.”

AE: What about the comedy with Emma Thompson? It’s not really what we used to seeing her doing, but it’s not at all new to her, how was it for you as a Director to bring that out in her again?

NG: It was a joy, Emma Thompson is just a national or international treasure and she is so fantastic, and I think a lot of people don’t know that she started in comedy, that she was in a college improv group and that she used to do stand up. It was a real honor and joy to show people what a force of a comedian she is and how incredibly skilled she is at making people laugh. For me, that’s true for all her comedy in all of her performances, but it was such a pleasure to let her really shine and come through and once again flex those comedy muscles.

AE: I totally fell in love with her again in this film because it’s a different Emma Thompson but also it’s this composed, complex character where she almost breaks but she doesn’t. It’s just a really powerful film, sometimes comedy doesn’t get the credit for saying important things and this is an important movie and message, and it’s so great for it to be told in a way where people can digest it and have fun, but also to think.

NG: Thank you. I’m so happy to hear you say that because it truly was the goal for it to be entertaining, and also to have a message, thank you. That really means a lot.

AE: Being a woman making films, directing films, that representation is so important to us. How significant is it for you to be a representative? Is it something you even think about?

NG: Oh my God it’s so important to me! Ever since my first movie, ‘’Chutney Popcorn’’ I have always fought to have women behind the camera in all positions as much as women are in front of the camera. I’m on the board of Women in Film. Our movie ‘‘Late Night’’ earned the ReFrame stamp which means there was gender parity in the crew. These are all issues I’m really passionate about and really proud to say that our movie did have gender parity, and did earn the ReFrame stamp.

AE: At the core what do you feel is the strongest message or take away of the film?

NG: I think the strongest message is that diversity and inclusion is good for everyone not just the person it seems to be helping. That women can be each other’s greatest enemies and it’s important to support each other and not buy into the fiction that we are in competition with one another. We never were, there’s always enough room for everyone. And to not let people turn you against each other because, if we turn on each other then all is lost.

AE: Is there anything you’d like to say that you don’t get asked about a lot?

NG: No, I thought you asked really good questions and thank you so much for including me and for promoting the movie, it’s so nice, I’ve always been a fan of AfterEllen so thanks for including Late Night on your site.

AE: I really loved the movie, and I really do hope a lot of people get to catch it. Thank you so much for your time! I guess if there isn’t anything else to say I’ll let you go get some rest, I know you’ve had a long day of promotion.

NG: Umm no, I mean unless you want to announce that Emma Thompson and I are going to be married, and you can totally include that. I’m only going to be referring to her as my wife, Emma Thompson from now on. (laughs)

AE: (laughs) oh thank God you gave me something gay, I needed a gay bite, we can end this interview now. Byeee!

Late Night is in theaters now.

*all images provided by Amazon Studios and subject to copyright laws.

Lesbianing with AE! Are You Undateable? 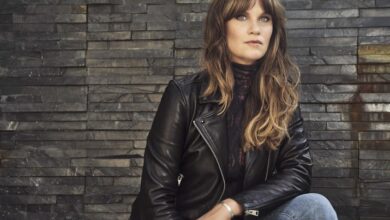