Jenna Gribbon makes art that articulates the intimacy of seeing and being seen as a women in a same-sex relationships and between women as friends. Gribbon’s art describes the risks and interceptions of female intimacy in public, and the joy and meaningfulness of female companionship in private. Oh, and the women aren’t hairless!

My Girlfriend in a short skirt, a row of men between us situates the artist behind a row of men watching Gribbon’s partner, Mackenzie, on stage. This painting struck me as symbolic of in the way same-sex desire is interrupted by the voyeuristic public. The stage represents unreciprocated gazes; Mackenzie’s eyes are averted in the painting. Gribbon’s sight of Mackenzie is blocked by a row of men who have a better view. Her appetite is denied. Mackenzie’s skirt, at the men’s eye-level, is the focal point between their heads.

Jenna Gribbon explains that the painting is “about that experience of standing in the audience with all these men in the front row and just watching her being seen.”

She says about her overall practice, “I love trying to make the viewer self-conscious of the fact they’re consuming this image.” Mackenzie becomes “the image,” the artwork being consumed, in My Girlfriend in a short skirt, a row of men between us. The way the men take up space in the painting and are featured in the title show how aware Gribbon is – as an audience member – that they’re watching her partner.

While we’re only seeing a representation of Mackenzie through viewing the artwork, so are the men who watch her perform on stage. Gribbon makes her own audience constantly aware that they’re watching a performance, as well.

Jenna Gribbon flaunts that she gets to see Mackenzie behind the scenes. The couple’s intimate life reveals an equal exchange of reciprocated gazes. Mackenzie is no longer on stage.

Despite Gribbon inviting us to witness the couple’s eroticism in Studio Break, we are also made self-conscious that we are looking by the fact the painting is only 10 inches tall. The audience’s desire to look at the artwork is a performance that the rest of the gallery observes. They must make an obvious effort to see the details. The audience are reminded they’re invading as they decide to look.

Mackenzie is not performing in Studio break like she is for the row of men. She’s not performing for anybody. They couple are seeing each other. We can’t see their eyes but we are aware they’re connected in a passionate gaze we shouldn’t be privy to.

Artworks like Tenderness and Trust, below, reveal the intense intimacy between the couple, from the perspective of Gribbon herself. Gribbon trusts us to view the tenderness of the moment without the same restrictions placed on Studio Break.

When Jenna Gribbon paints the couple in public, she makes small gestures the focal point. She reveals the way in which same-sex public displays of affection are oftentimes a political act. When in private, however, the two are laid bare.

In Riding above ground, with you, the afternoon glow highlights the couple’s touching hands. The feet and shopping bags in the background show us the couple aren’t alone on public transport. Such gestures are both an expression of love and an act of resistance. The subtle intimacy in Gribbon’s depictions of public romance is contrasted by her more explicit private scenes.

In Mackenzie and I on the Couch, Mackenzie engages differently with the guitar than she does in front of the men. In this private moment she’s relaxed, her eyes are lifted, her body language shows she’s not only open to being seen, but she wants to be.

The couples’ nakedness demonstrates a comfortable vulnerability that opposes My Girlfriend in a short skirt, a row of men between us. The fluorescent nipples and distorted background remind us, however, that this is merely an image. A representation of their intimacy. We’re made self-conscious about the fact we’re looking and that we’re excluded.

Gribbon expresses scenes of woman-bonding in a way I haven’t seen before. The figures are often painted in humorous settings – with Gribbon’s statement fluorescent nipples – but the clear bond between women is a communal vibe to strive for.

In It was a bit like this, Cat was helping Amy with her Sunscreen, but there was no grass or fruit, the women lounge naked together in beautiful weather. The unceremonious title fits the vibe. There’s something I envy about the artwork: is it the space away from prying eyes? The familiarity? The sheer power of women hanging out?

Gribbon’s art communicates her story, as a same-sex attracted woman navigating relationships and friendships. Her work battles the erasure and fetishism inflicted upon female love by presenting it as both sexual and romantic. She exposes the pornified perception of lesbianism in a way that doesn’t purify it, that doesn’t shy away from its eroticism. It’s a thin tightrope to walk – articulating same-sex desire in a way that doesn’t contribute to society’s fetishism of it – but Gribbon walks it with humour and care. 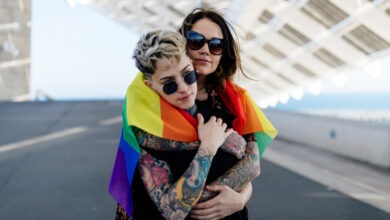 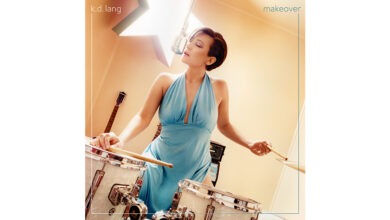 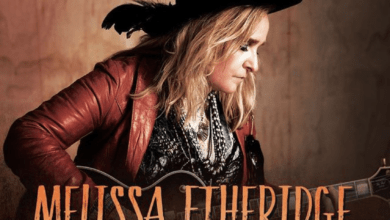