If you have ever played the indie-game Stardew Valley then you have probably come across the NPC (non-playable character) Leah. Leah resides in a small cabin just outside of Pelican town, and she is one of the twelve NPC’s that is eligible for marriage, to men and women. 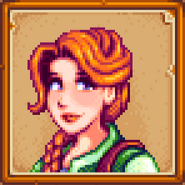 Leah is an artist always creating sculptures and paintings inside her cottage. She loves being outdoors, and forages often for fruits to eat; she also just loves spending time in nature. Leah lives just beside Marnie’s farm. While Leah is shy about her artwork and does not often show it, she moved to the countryside to be inspired, and your character can even boost her confidence. Leah loves to eat, especially things like goat cheese and salad and you can catch her at the bar in the evenings with some wine. All around, Leah is just a fun character to spend time with.

Now, what makes Leah Cottage Core goals? First, it is important to understand what Cottage Core is. Cottage Core is a niche aesthetic that delves into the visualization of slow living on a Western farm. Some themes derived from Cottage Core are nature, sustainable living, farm animals, plants, and gardens. Does that sound like anyone we know? Cottage Core quickly evolved into a lesbian niche as well, as many lesbian and bisexual women began to identify with the Cottage Core aesthetic.

Essentially, if you’d like to frolic in the countryside and live in a secluded cottage surrounding by nature, you may in fact be a cottage core lesbian. As the Cottage Core lesbian trend began to grow, many referenced Ms. Honey from the movie Matilda, played by Embeth Davidtz, saying that she was the first true Cottage Core Lesbian.

mrs honey was the first cottage core lesbian. SHE was the blueprint. pic.twitter.com/rf0VEzSSNt

The reason behind Ms. Honey being the first Cottage Core lesbian is because she abides by the Cottage Core themes. Ms. Honey loves flowers and the countryside, she has a cottage literally smack dab in the country, with no man to be found anywhere. A Twitter user said, “Ms. Honey was the first cottage core lesbian. SHE was the blueprint.” We can’t really argue with that!

Now, circling back to Leah and Stardew Valley. Cottage Core is a very specific niche, and with the added lesbian element, it seems like a dream aesthetic. Leah fits here perfectly. One thing the creator of Stardew Valley has done very well is to make the NPC’s eligible for marriage to men and women. Thus, once a relationship has started to form between yourself and Leah, she will admit to you that she is attracted to women. *swoons*

When you first begin to form a relationship with Leah and talk to her about her art, she will get interrupted by a phone call with her ex, Kel. Your character will have the option to ask Leah for a kiss. If your character is male, Leah will call you a pig. However, if your character is female, Leah will blush and say, “Oh! You’re…? That’s good to know. Me too.” Also known as the cutest response ever. Even though Leah blushes and seems to be happy from this conversation, she will hit you with her art-based hammer and kick you out. After this interaction, it will be noted that Leah’s ex, Kel, is a woman. This truly establishes Leah as a lesbian if your character is a woman, of course.

Leah is living quite the dream Cottage Core lesbian life. She spends her days creating art, going to the lake, going to the beach, and foraging for flowers and fruits alike. Leah’s friend Elliot lives in a small house on the beach, and the two seem to embrace every aspect of slow living. Leah will tell you that she dreams of being a successful artist, and that is why she moved to the countryside. She wanted to feel deep inspiration from nature and the world around her. As you grow closer, you begin to inspire Leah to have her own art show, and she even makes you a sculpture. If you decide to get married, Leah will move to your farm to live with you and will add an art studio to your home. Thus, you will have reached full lesbian Cottage Core potential!

Do you enjoy long walks in the forest, collecting flowers and mushrooms, petting farm animals, and drinking tea on your cabin’s porch in the countryside? Then you may just be a Cottage Core Lesbian. If you are interested in trying out a new game and dating Leah, Stardew Valley is where it’s at. The game itself is soothing as it is not a high-pressure video game, and has a calming soundtrack. With the addition of Leah’s slow lifestyle, the game makes for a calming, fun time. That’s why Leah is your #CottageCore lesbian goals, and you cannot convince us otherwise!

Stardew Valley is available to play on Nintendo Switch, Xbox One, Steam, PlayStation 4, iOS, and Android.