Rosie O’Donnell has been announced as one of the latest additions to The L Word: Generation Q. A press release from Showtime announced that “O’Donnell will play Carrie, a brash and kindhearted public defender who is thrust into Bette’s life and quickly gets under her skin.” While little is known about Carrie so far, we don’t have long to wait. Filming for the second season has just begun in Los Angeles. The new season of Showtime’s sapphic drama is expected to air in 2021.

The L Word was a big moment for lesbian representation in more ways than one. Throughout the original series, cameos from lesbian icons like Billie Jean King & Sandra Bernhard were a loving nod to the audience at home. Gen Q flirted with this proud tradition in season one, featuring lesbian kind’s favourite footballer Megan Rapinoe as a guest on Alice’s show. And now, with Rosie O’Donnell joining the cast, Gen Q has shown a fresh commitment to cameos.

A comedian, actress, and producer, Rosie O’Donnell is a woman of many talents. The long list of awards she has won – several Emmys, a Tony, and two Kids’ Choice Awards – are testament to her skill. Her abilities as a talk show host even rival Alice. Because Rosie O’Donnell has never shied away from speaking up for what she believes to be right.

In 2002 she made a cameo appearance in another iconic gay TV show: Will & Grace. Here, Rosie O’Donnell played a lesbian mom.

Weeks later, during her performance at the Ovarian Cancer Research benefit, Rosie came out as lesbian. In her usual no-nonsense way, she said: “I’m a dyke! I don’t know why people make such a big deal about the gay thing… People are confused, they’re shocked, like this is a big revelation to somebody.”

Speaking of coming outs, we can’t forget the time Ellen DeGeneres came out as “Lebanese” on Rosie’s talk show, joking about her infamous “Puppy Episode”. Ellen even ribbed Rosie saying, “Sometimes I pick up that you might be Lebanese.”

Running The View, Rosie O’Donnell became the talk of daytime television during the ‘00s when she challenged the Bush administration’s decision to go to war with Iraq.

A committed Democrat, this wasn’t her last run-in with a Republican president. She also went toe to toe with Donald Trump, describing him as “not a self-made man [but a], snake-oil salesman on Little House On The Prairie.” These words haunted 45, who went on to take pot shots at O’Donnell not only on Twitter but during a presidential debate.

After leaving The View, she went on to host The Rosie Show. Though it only ran for only one season and ninety-four episodes, having her own show enabled Rosie O’Donnell to turn her attention to advocacy. By this point in her career, Rosie had given over $100 million to charity. She supported children from poor backgrounds and families made homeless by Hurricane Katrina.

In her personal and professional life both, Rosie O’Donnell has blazed a trail for lesbians. She married Kelli Carpenter in 2004 after being denied spousal privilege, saying that “I am now and will forever be a total proponent of gay marriage.” The couple went on to have four children together.

Though the marriage did not last and she has a difficult relationship with one daughter, Rosie O’Donnell has consistently used her platform to undo the stigma attached to lesbian lives. And Team AfterEllen could not be more excited by this new step in her career.

A Few Lesbian Holiday Movies We'd Like To See

Pain: King Princess Drops Gay Music Video She Wished For as a Kid 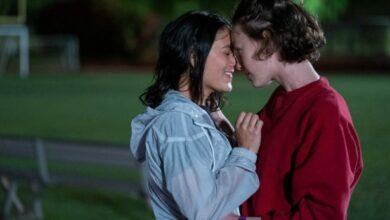