This won’t be a shock to any lesbian who has seen the 2004 movie Mean Girls, but I’m going to make the claim: the character of Janis Ian, played by Lizzy Caplan, was clearly a lesbian. Yes I know, heteronormativity (and writer Tina Fey) forced Janis into a baffling ending with Mathlete Kevin G but we all know it didn’t make sense.

Even when I was a kid, before I realised I was a lesbian, I was so confused by Janis Ian’s ending, and I’m not the only one. Every lesbian I know is bewildered by it. Many of us relate to trying to force an attraction to any boy interested in us as teenagers to appear “normal” so the Janis and Kevin G thing isn’t fooling anyone. Especially when she was disgusted by boys, him included, right up until the end of the Spring Fling.

Asserting Janis Ian wasn’t a lesbian by putting her with Kevin G in the end, despite the gay-baiting and the fact Janis never denied the lesbian rumours, kind of feels like the old “she’s just going through a phase, once she matures she’ll grow out of finding boys unattractive” myth. Because she really didn’t find boys attractive and acted — and spoke — about girls differently.

Mean Girls isn’t the first gay-baiting film with obvious lesbian characters that are made to end up with men. Bend it Like Beckham needs a sequel to clear up the indisputable connection between its two female leads. Why don’t we add Mean Girls to the list of early-2000s movies that we demand closure from? Like I wrote about Bend it Like Beckham, the internalised homophobia, homophobic bullying, and heteronormativity could mean the lesbian characters are shielding the truth from the audience, too. I mean we often shield it from ourselves, let alone others.

Janis Ian is a rebellious artist who recognizes new girl Cady Heron as an outsider, just like her. Janis welcomes her into the “best people you will ever meet” group with gay-guy Damian, the moment they meet. As a jock walks past and teases Janis, asking where she got her wig from, she retorts “your mom’s chest hair!” and then calmly introduces herself to Cady afterwards. Oh, how many times I jokingly quoted that response during high school.

The relationship between Damian and Janis is characteristic of gay and lesbian bonds. The way they tease each other with mild homophobia, like when Janis says Damian is “too gay to function,” is only okay if Janis is a lesbian. In the school environment where teenage girls and teenage boys learn how to be heterosexual, Damian and Janis find refuge in each other. Janis’ attraction to men is non-existent. At all.

Not only is Janis Ian named after the lesbian singer-songwriter of the same name, and dresses in 90s riot grrrl fashion — which traditionally opposes heteropatriarchal oppression — Janis Ian and Regina George were “best friends in middle school” before Regina shunned her for “being a lesbian.” While there is a theory that Regina might have misheard Janis saying she’s Lebanese for being a lesbian (which isn’t discussed in the movie), Janis’ feelings of betrayal hint to there once being a deep connection between the two.

Janis encourages Cady to get closer to ‘The Plastics’ and, when invited back to Regina’s house, she sees Janis’ picture in the Burn Book, along with the slur “DYKE.” Regina had everyone sign a petition to agree with Janis being a lesbian. Regina claims that Janis was so “obsessed” with her that when she got a boyfriend during their friendship, Janis kept asking why she wouldn’t return her calls. Then Regina didn’t invite her to an all-girls pool party because Janis “was a lesbian.”

Janis “dropped out of school” after Regina cut her off completely, and was “weird” when she returned. Where did Janis go during that time? Was she upset because her best friend completely abandoned her or did she actually have feelings for Regina? Either way, she suffered mentally for Regina’s treatment. Whether or not Janis is actually lesbian doesn’t discount the relatable experience of being ostracised by straight women, including feminist female solidarity, because of your sexual orientation.

The theory that Regina misheard Janis say she was a “lesbian” when she actually said she was “Lebanese” is debunked by the fact Regina never said that Janis confessed her lesbianism. She didn’t say that Janis told her she was a lesbian, she said Janis got possessive when she got a boyfriend. We know Regina lies. She lied to Aaron Samuels to sabotage his connection with Cady and she tells girls she likes their outfits when she doesn’t. Even so, if she thought Janis had told her she was a lesbian then she’d say that instead of her other reasons.

Cady, Janis and Damian’s frenemy revenge plan against Regina turns into an obsession on Cady’s part. She can’t stop talking about her, she wants to be Regina, she wants Regina to like her, and she knows the amount she talks about Regina bothers people. As she evolves into a member of the ‘Plastics’, Cady begins talking negatively about Regina’s appearance and Janis won’t have a bar of it. Cady says to Janis “she’s not even that good-looking, if you really look at her.” Janis, absent-mindedly working at her after-school job, replies “I don’t know, now she’s getting fatter she’s got pretty big jugs.” She’s not looking for a laugh. It just comes out.

I’ll say it again: the ending doesn’t dispel her lesbianism. Janis and Kevin G’s relationship isn’t believable. There is no lead up to their romance, no chemistry, Janis doesn’t even look at boys in that way. The only time Kevin G hints to finding Janis attractive is early in the movie when he says “I’d rather see you out there, shaking that thing,” as Cady and ‘The Plastics’ are performing their Christmas number, and Janis responds with disgust. On top of that, Damian and Janis go to the Spring Fling in matching purple tuxedos, a colour used as a symbol of gay and lesbian resistance.

If Mean Girls is just a movie about misunderstood teenagers defying stereotypes and Janis Ian is supposed to gay-bait-and-switch so we “don’t judge,” then it’s pretty tone-deaf. “Lesbian” shouldn’t be viewed as a bad thing to be perceived as, yet it was included as one of the “horrible things” girls call each other during the movie. Being misjudged as a lesbian isn’t the same as being called a “sl*t.” Yes, homophobia exists, but straight girls who get wrongly perceived as a lesbian aren’t the real victims here. Lesbians are. Janis Ian was one. There was no sign of her being into boys until right at the end… which wasn’t even convincing! 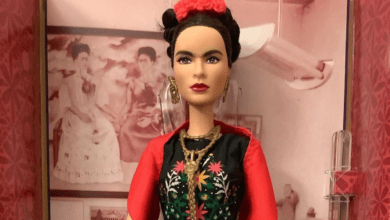 The Commodification of Frida Kahlo